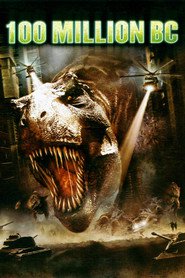 
Tagline: An elite military team. Sent back in time. They will not return... Alone.

Plot: A scientist from the failed Philadelphia Experiment leads a team of Navy SEALs back in time to the Cretaceous Period to rescue the first team he sent back during the 1940s. Things go wildly awry though, when on his return he accidentally brings a giant, man-eating dinosaur back through the portal and into modern-day, downtown Los Angeles.