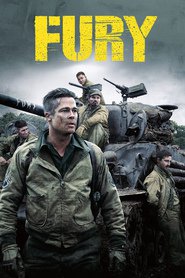 Plot: Last months of World War II in April 1945. As the Allies make their final push in the European Theater, a battle-hardened U.S. Army sergeant in the 2nd Armored Division named Wardaddy commands a Sherman tank called "Fury" and its five-man crew on a deadly mission behind enemy lines. Outnumbered and outgunned, Wardaddy and his men face overwhelming odds in their heroic attempts to strike at the heart of Nazi Germany.

Validated XF Owner
I haven't seen this one yet. Brad Pitt isn't on my must see actor list.

Applications Owner
Raffles Owner
TMDb Threads Owner
OSB Display Owner
PayPal Balance Owner
Custom Add-On Owner
Social Groups Owner
XF2 Groups Owner
XF2 Raffles Owner
XF2 OSB Owner
XF2 Movies Owner
XF2 TV Owner
XF 2 PayPal Owner
XF2 Games Owner
XF 2 Style Stats
XF 2 Music Owner
He is not that high on my list either but I did enjoy this one. They said that Saving Private Ryan was one of the most realistic war movies made and I would say this one was about the same in that category.
Movie information in first post provided by The Movie Database
You must log in or register to reply here.
Share:
Share
Top