Read more about this resource...

Read the rest of this update entry...
F

Registration Spaminator
Is there any demo on this addon? Would like to see it in action.

Read the rest of this update entry...

There is some basic ones running on https://ozzmodz.com/xenpro/
X

Validated XF Owner
No, this is designed for the front end.
X

XF2 Groups Owner
XF2 Notepad Owner
Registration Spaminator
Login Spaminator
Just a suggestion, I think if you can apply it to the admin side it would be a great tool to teach new admins about processes that they need to do.
S

I feel a lil embarressed, since I have that gut feeling, I am neglecting something obvious. I am trying to set-up this on a 2.2.3 XF for the unregistered usergroup, targeting the login/register button. The usergroup is allowed to see and hide T&Hs. The selector for the nav item is
Code:
, copied with Chrome (weired, but Firefox seems to copy slightly different selectors). The hint has only 1 criteria: User is a guest.

The point is, nothing shows up at all. I can see the hin included in the page source cope included, but wether in Chrome (no adblock and no limitations) nor in FF something comes up. Do I miss something here?

Mhm..have you given my selector a try, also? For me no selector works, not even the most obvious ones. I guess I am missing something with usergroup settings or criterias, which I have not set. For clearification: when I add a hint, put in a title, a selector and a text, setting no other criteria, this hint has to show up for every visitor, regardless of usergroups, or?

Validated XF Owner
No, I just inspected the elements and selected the appropriate css to target.
S

Validated XF Owner
Applications Owner
XF2 Forms Owner
Registration Spaminator
XF2 Tours Owner
XF2 Force Rules Accept
Since I added that to the above post while you had already answered:
For clearification: when I add a hint, put in a title, a selector and a text, setting no other criteria, this hint has to show up for every visitor, regardless of usergroups, or?

Validated XF Owner
It depends on the criteria you set.

Read the rest of this update entry...
A

Validated XF Owner
I'm having one hell of a time getting this thing to work on a custom button we have and a custom "block". I'll preface this by saying I'm not a coder...can hack together some lines of code but that's about it.

I've tried the selector route, I've tried viewing the classes and trying a ton of different classes, bits of those classes, even tryied to target a div "name" as well (probably did that wrong too but I tried #name and a.#name...which that second one probably would never work but...I'm trying everything and anything I can). I guess I'm just extremely stupid when it comes to this but I feel like I've tried everything I can think of. So my apologies on my absolute ignorance in all of this.

Through troubleshooting and trying to figure out why I can't get this addon to work, I was in inspect element and went to console. Despite having the files on the server, I'm getting this:

We don't have any minifying scripts on the server so this is confusing. js minify is turned off in cloudflare as well (it's always been disabled). I've tried this on a test environment (separate server) and my live site (only admins can see), both give the same exact errors. Not sure if the files were meant to be minified but this is what is in the download and on my server: 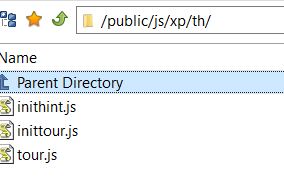 When I view source, the information is on the page:

From what I've provided here, you can see on my site that I'm trying to target our custom button "Subscriptions" (old name was Games, so ignore the old wording, just trying to get it to appear) as well as our popular games section at the top of the site.

I'm about to test out changing the names to add .min to them to see if that works but was hoping I could get some help here in the event that it doesn't work (seeing as it is working for other people...I must be doing something wrong).

I know I contacted you (

ozzy47) after you took over from the prior dev. I had contacted the prior dev looking for help and he never provided it and when I contacted you, you were busy at that time. I bought this addon almost immediately after it was released and I've yet to use it this whole time so I know I haven't paid you anything towards this and I feel bad about that seeing as you extended my license due to my inability to actually get it to work (my fault, not yours). If you need me to pay for support, I'll gladly pay it. I just want this to work.

Any help is much appreciated. TIA.

edit: So I changed the names of the files to include .min and when I click the "tours" button, it no longer reloads the page like it was doing before. Since it seems like that part of it is working better, I'm going to go through all the things I did before to see if I can get it working but I just attempted 2 different things and still nothing. I'll report back if anything changes.
A

AND THE TOUR POPPED UP!!!! I'm not sure if there is a better way of copying the selector like I did, I'll mess around with the code but for now...I was able to target both the tours that I wanted to in the post above.

So it seems there was 2 problems for me with this:
1. Had to rename the .js to .min.js
2. Had to slim down the selector code so it wasn't getting cut off.

So it looks like you have to provide the .min.js files in the download for it to work...unless something wonky is going on with my live server and test server that the page shouldn't be calling for .min files. Let me know!

OMG I'M SO HAPPY
A

Validated XF Owner
Sorry, now I'm just spamming. I had edited the custom css and nothing changed. Is there a way to call that template? Or what is the purpose of it if it doesn't update anything? Again, coding noob, sorry. I did change the main.css and finally saw the changes I was trying to make so I felt relieved that I'm not a total bum lol but didn't know if it would cause a problem on updates, hence why I was trying to do it in your custom.css.
A

Validated XF Owner
Ok...I swear...last time until you reply. Is there a way to automatically start tours or hints without users having to click the tours or hints? I was wanting to either have one or the other (or both but at different times) to start after a specific set of time. And/or once a new person registers, for the hints to automatically glowing to help guide them along. I didn't see any options for that but figured I'd ask if there was a possibility for it.
A

Validated XF Owner
Bug: When adding a hyperlink to hints (haven't tried tours yet) doesn't work. When you click "hints", the page reloads and the hints do not appear. It says html is allowed so I figured it was a bug.
You must log in or register to reply here.