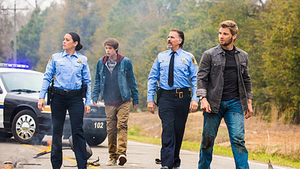 After Army veteran Dale "Barbie” Barbara buries the body of a man he killed, he is derailed on his drive out of the town of Chester’s Mill by a preternatural barrier. He saves young Joe from the wreckage that flies down after a plane crashes into the mysterious barrier. When Reporter Julia Shumway invites Barbie to stay at her house, he recognizes her husband as the man he murdered. As Caroline and Alice are driving through town with their teenage daughter Norrie, they are shocked by Norrie’s brief epileptic episode that Joe also experiences shortly thereafter. At the local radio station, engineer Dodee and DJ Phil learn the rest of the world is broadcasting news of the dome that has fallen over Chester’s Mill and also uncover radio feedback of a strange, ethereal voice. After Joe’s sister Angie ends her fling with Junior (son of town Councilman Big Jim), he imprisons her in his family’s underground shelter. Before Sherriff Duke can tell Deputy Linda about the excess propane he has been stockpiling with Big Jim, his pacemaker bursts out of his body, a result of being too close to the barrier, and ends his life.
TV show information provided by The Movie Database
You must log in or register to reply here.
Top Bottom