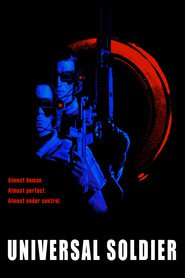 
Tagline: The future has a bad attitude.

Plot: An American soldier who had been killed during the Vietnam War is revived 25 years later by the military as a semi-android, UniSols, a high-tech soldier of the future. After the failure of the initiative to erase all the soldier's memories, he begins to experience flashbacks that are forcing him to recall his past.

Validated XF Owner
I haven't seen this one, but it's plot is strangely similar to Robocop.