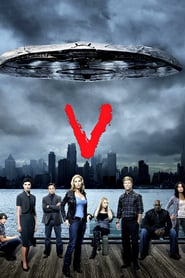 Overview: V is an American science fiction television series that ran for two seasons on ABC, from November 3, 2009 to March 15, 2011. A remake of the 1983 miniseries created by Kenneth Johnson, the new series chronicles the arrival on Earth of a technologically advanced alien species which ostensibly comes in peace, but actually has sinister motives. V stars Morena Baccarin, Lourdes Benedicto, Morris Chestnut, Joel Gretsch, Logan Huffman, Charles Mesure, Elizabeth Mitchell, Laura Vandervoort and Scott Wolf, and was executive produced by Scott Rosenbaum, Yves Simoneau, Scott Peters, and Jace Hall. The series was produced by The Scott Peters Company, HDFilms and Warner Bros. Television.
TV show information provided by The Movie Database
You must log in or register to reply here.
Share:
Share
Top